On October 1st of this year, there was a shooting massacre in Las Vegas; a man who later was discovered to be Stephen Paddock shot over 500 rounds from the 32nd-floor window of the Mandalay Bay Hotel at an audience of over 2,000 people at the Harvest festival. The shooting took 58 lives and injured at least 515 people. This tragedy grabbed the nation’s attention.  Americans felt sad and grieved for those people victims of the disaster. The massive shooting also brought up the ever-increasing topic of the gun control in the United States. Gun control is a hot topic, which has been discussed for many years among this country but has brought about little change.

As an immigrant to America, I do not understand the gun policies. So, I went online and researched. I was surprised to find out that America has two amendments and a few supreme court cases that support the use of the gun for individuals.

The next Amendment is the Fourteenth Amendment. The Fourteenth Amendment (Amendment XIV) to the United States Constitution was adopted on July 9, 1868, as one of the Reconstruction Amendments. The Amendment addressed citizenship rights and equal protection of the laws and was proposed in response to issues related to former slaves owners. This one is not as obvious as the Second Amendment, but it also “addresses citizenship rights and equal protection of the laws.” What it does is reinforce the explanation and supports the use of guns by U.S. citizens. I was shocked by my findings. We all know that how important of the Amendment to the Constitution, that is unexpected which it has two of those to support the use of a gun.

In my quest to find answers, I spoke to our principal, Ms. Huegel, who before becoming a principal was a History teacher. I asked her what she thinks of the two Amendments in our Constitution that support owning guns.  She claims that the Second Amendment was established after the Revolutionary War when there was a British prohibition for the colonists to bear arms. And,  that after our independence from the British, the forefathers wrote the Constitution that enables the people to have the right to bear arms.  Ms. Huegel also explains that the Fourteenth Amendment is about state power. Each state has the right to decide whether they allow their citizens to own or carry weapons. Therefore, different states in the United States have changed gun policies. An example of this is New York who has more restriction on gun ownership than some states in the south.

I cannot understand why America allows people to bear arms. I do know that these rules were established when this country very “young,” but many years have passed, and these laws have not changed. It is time for our government to think about whether they are going to continue with the same policies established by the Founding Fathers or stop people from having arms. The Gun Violence Archives, show statistics that are very scary. They report a total of 48,370 gun incidents and 12,087 deaths. The saddest statistic is that the number of children and teens killed or injured is 3091! It is shocking that with such significant number of victims the policies remain the same.

Yes, people have the right to bear arms and use self-defense, but how many guns should a person own? One? Two? Three? Or 48 guns? This is the number of firearms that the Las Vegas owned before causing the most significant massacre in American history? This question should have an answer. Otherwise, people will buy more and more guns. Before buying so many weapons, they should explain why anyone needs that many guns. 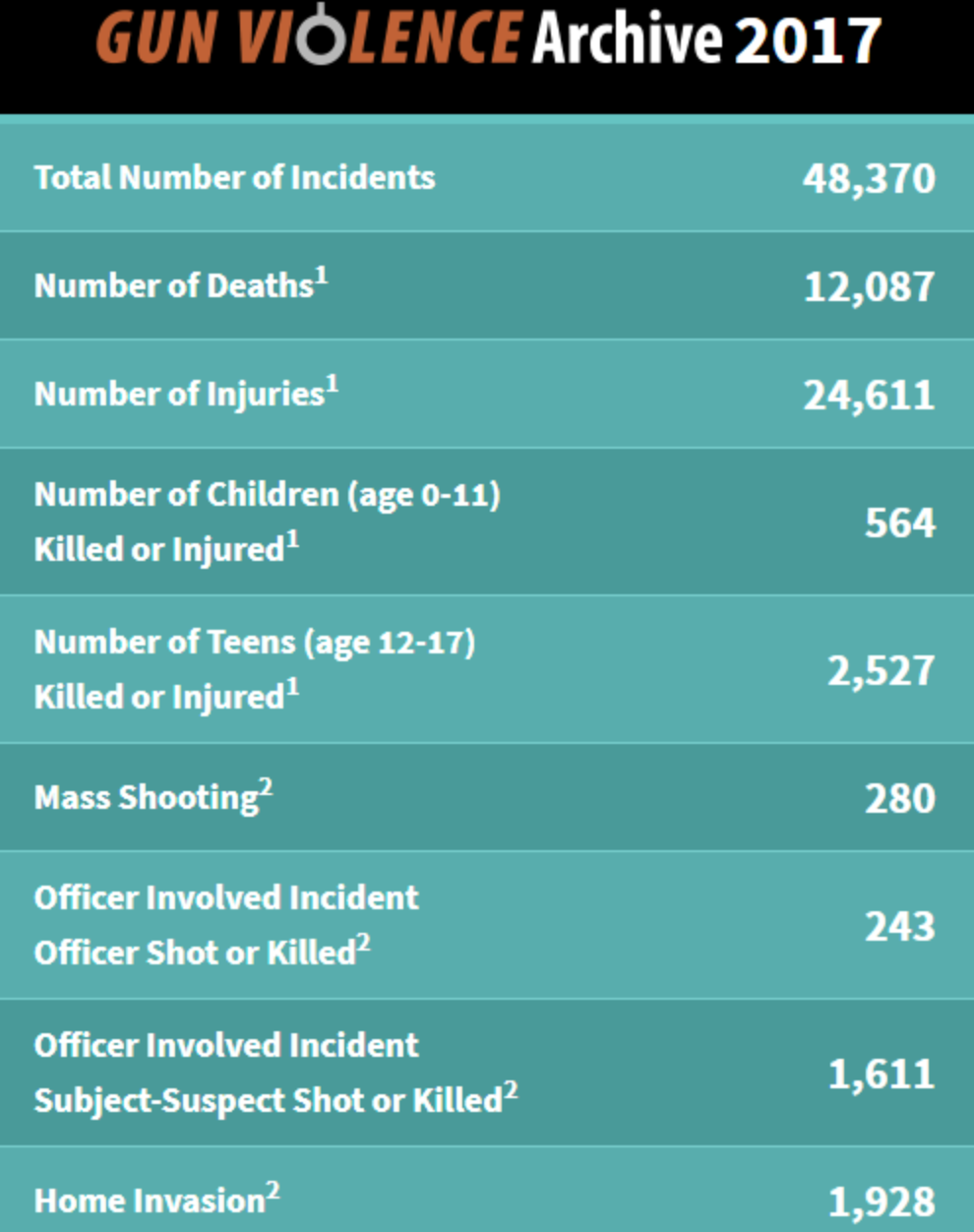 After the previous question,  another question came to mind. How is it that a murderer can own so many guns and the authorities do not know about it, or is it that they do not care? According to USA Today,  the murderer bought 33 guns within the last 12 months. Under the federal laws, it should be reported to the authority if a person buys multiple firearms per time, but it does not have legislation requiring it should be stated if a person makes many purchases.

Therefore, if a criminal wants to commit a shooting massacre, as in Las Vegas, then that would not be a problem. All they need is a year to prepare and buy multiple guns at different times the criminal would not only have 48 or maybe would have 148 if the offender has a partner. The authorities may say that the guns were purchased illegally, but, this also presents a problem.  The problem is that gun control is difficult and gun sales challenging to regulate or to supervise.  Then, how can people feel safe in this country?

Should everyone own a gun and carry to protect themselves? If the government is not going to have more restrictive on the use of weapons, then people are going to begin to police themselves.  It is clear that our country has lost control when it comes to people owning weapons. We hear about gun violence on our streets on a regular basis. It seems like teenagers, adults, or the elder, all own guns or knows someone that does.

This is a hard topic to discuss because of the varying opinions. We have a long road ahead, but are we going to wait until more innocent people die to begin to talk about it?  Perhaps, we can give up and let the gun owners protect us. We should face the problem directly; we should solve the problem and recognize our mistakes. The regulation of guns is not enough; it does not guarantee safety for the people who are living in this county. The government should stand up for the people; it should have more policies to control the use of a gun by individuals.  To provide safety for our people and to ensure the security of the country and the government should strengthen gun control.

The last question, do you want freedom or life?