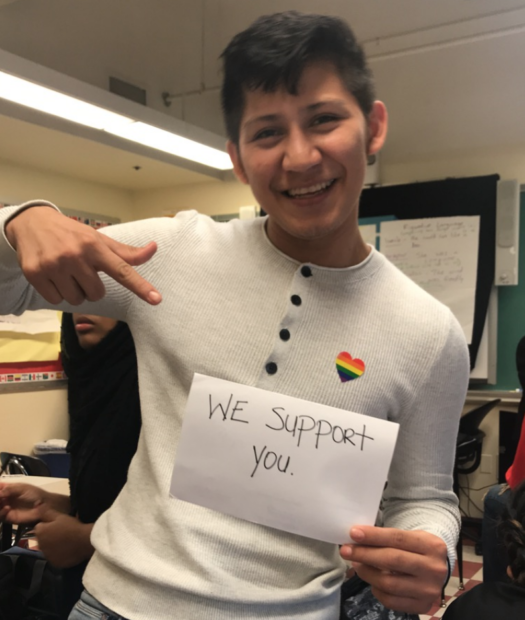 The National Coming Out Day is a special day that is celebrated annually that basically consists of helping people to be aware of the LGBTQIA community and that they deserve the same rights as everyone. In addition, this day helps to build an environment where living honestly and openly for this community is possible. So, what exactly does LGBTQIA stand for? Well…

L is for Lesbian meaning a girl who is attracted to the same sex.

G is for Gay meaning a guy who is attracted to the same sex.

B is for Bisexual meaning attraction to the two genders.

T is for Transgender meaning a person who goes through a surgery from man to woman or from woman to man.

Q is for Queer or questioning. Queer means heterosexual or cisgender (cisgender means relating to, or being a person whose gender identity corresponds with the sex the person had or was identified as having at birth.) Questioning means a person who is unsure of their sexual identity and they don’t label themselves as something specific.

A is for Asexual meaning a person who experiences no sexual attraction to people.

In this article, we decided to interview a teacher and a student who could give us their point of view. They will show us that there is nothing abnormal about being a part of that community and that they are like everyone else and should be treated in an equal way. The teacher that we decided to interview was Mr. Judd and the student was Hernán Veliz.

Lucia: Why is it so difficult for many people to come out of the closet?

Hernán: For some people to come out of the closet, it is like a dare and at that moment you come out it is as if you are digging your own grave because we have to face a lot of criticism from people who do not like your way of dress and love. We are exposed to Bullying where it can possibly lead to hate crimes, but most of all, it is the fear of what your parents and the rest of your family will say about you.

Lucia: Was it difficult a difficult moment for you when you told your friends and family that you are gay?

Hernán: The moment that I decided to come out the closet it was difficult for me because I was scared that my parents and friends would reject me and also because I thought that they wouldn’t understand.

Lucia: Did you have something in your life related to this topic that left a mark on you? I mean did someone ever hurt you? Verbally or physically?

Hernán: During my whole life, since my first school, I had endured through bullying and a lot of humiliation for being who I am. Unfortunately, for a period of time, I was depressed and some people called me bad names, but thankfully I could keep going with my life and be the person that I am.

Lucia: Have you always known that you were gay or did you realize later on in your life?

Hernán: I started noticing the change when I was 12 and that is when I realized that I am gay.

Lucia: Can you give an advice to those who are still in the closet and are scared?

Hernán: My advice would be that they should come out because we are in a world where we have more help. They have to live their lives how they like to and to not be scared of what people will say.

Mr.Judd: My main thought is that we are just like everybody else, we are teachers, we are doctors, we are librarians, we are people who work in the grocery, you know, the biggest thing for me is that there’s no real big difference. I mean, it’s different when people get together with people that are like them so they can kind of share their experiences, enjoy each other’s company but as far as like in the world. I’m a teacher and that doesn’t really make any difference.

Lucia: Have you ever been discriminated or judged for your sexual preferences?

Mr.Judd: For me, not really I think actually because of my size, Mr. Judd laughed. I think partially that and I make a point to not talk about it in class for general sense to respect everybody because every individual is different and I don’t want to bring that in the classroom. A few students know something about my life individually. However, I had a lot of friends who have been judged in the streets They have been beaten and similar things. People who have been drunk and abuse them, but it has never happened to me.

Lucia: I have one more question, what can you say to those students who are new in this country, how can they adapt to the environment, because you know that in other countries these things are “not normal.” They see different sexual preferences as wrong. What advice can you give them?

Mr. Judd: Well! There’s a lot of answers to that question. The first part of it is that there’s a reason why people want to come to this country that reason is freedom. Even in your family who think the way you live is wrong, tell them, “Don’t you worry about it because I’m an adult, you’re an adult, I love you and you love me and that’s it.”

Lucia: What other advice can you give to those students that think that being gay or lesbian is wrong?

Mr. Judd: Join groups, the national coming out day was a great idea, students that didn’t know what it was learned a little bit about it. Some of my students asked me, “What is that? Why are you wearing that?” So, I told her about the national coming out day and she was like  “Ugh!” And I said, “No ugh!” We respect everybody here especially you guys that as immigrants you deal with that sort of discrimination all the time, you understand how is like to feel like everyone is looking at you funny or judging you, as someone who doesn’t belong here.