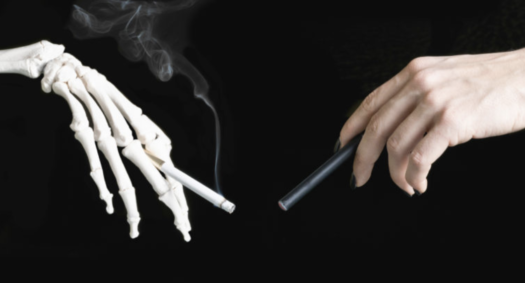 Vaping is a new fad that is commonly used by teens and young adults. Vaping is also called E-cigarettes, an electronic product that mimics cigarettes, with the same look, smoke, taste, and feel as cigarettes.

As we know, vaping is inhaling nicotine in vapor form using an electronic device, many teens and young adults have recently been sent to the hospital for it. In recent years, the e-cigarettes are most popular around the world. Many people like it because they thought that it would not cause any negative effects like cigarettes that cause harm to the body. That’s wrong, they don’t understand that vaping can cause harm like cigarettes.

So far, many schools are implementing rules that indicate that students can not use vaping. Schools are also educating students on the effects of vaping to students. According to Newsela.com, “Experts are worried about nicotine’s effects on student’s brain.’’It shows that vaping can cause many medical issues. This includes breathing issues, potential heart problems and even seizures, most serious disease is cancer. At times the vaping’s nicotine content are very high, and the harm can be much higher than ordinary cigarettes.

So many schools wants to stop the spread of vaping due to the harm it is causing our population and this harm keeps on increasing. These schools may start to teach students about the types of vaping and effect for human body in the middle school. They hope that this can spread awareness and stop students from vaping.